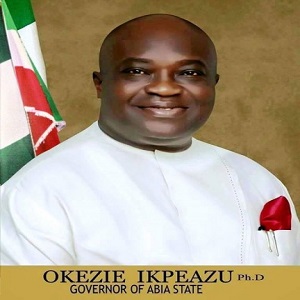 He attended Amaise Central Primary School, Umuobiakwa. In 1973, he left for high school in Eziama High School, Aba and then to Ihie High School, Isiala Ngwa, where he took his School Certificate Examination in 1979. In 1980, he proceeded to the University of Maiduguri (UNIMAID) for a first degree in Clinical Biochemistry and Graduated in August 1984.

Dr. Ikpeazu began his career as a clinical biochemist while serving under the mandatory National Youth Service Corp (NYSC) between 1984 and 1985 with the medical laboratory of Rivers State University of Science and Technology (RSUT) Port Harcourt. He returned to the University of Maiduguri for a masters degree in Biochemical Toxicology and graduated in 1990. While with the university he served as Graduate Assistant at the department of Science Laboratory Technology, University of Maiduguri between 1986 and 1987. He proceeded to the University of Calabar where he lectured while pursuing a doctorate degree (PhD) in Biochemical Pharmacology. He graduated from the doctorate programme in 1994.

Dr. Ikpeazu belongs to many prestigious member clubs including Biochemical Society of Nigeria, the Nigeria Environmental Society and Rotary Club of Eziukwu Aba, Trustee and the President of Eastern Ngwa Country Sports Club of Nigeria.

He contested for the 2015 gubernatorial election under the umbrella of the People Democratic Party (PDP) and was sworn in as Governor on May 29, 2015.