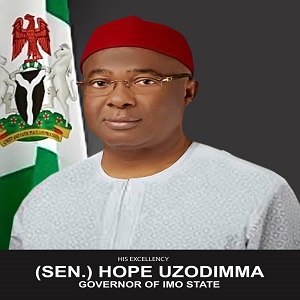 Family
Hope Uzodinma was born on 12 December 1958 in Omuma; his father Chief Michael Uzodinma held the chieftaincy title of Igwe of Ozuh Omuma and his mother was Ezinne Rose Uzodinma (née Nneoha). He is a kinsman of the Okoro family of Etiti-Omuma. Uzodinma is a devout Catholic, and is married to Chioma Uzodinma with seven children.

Background
He holds a Diploma in Maritime Management Technology, and Higher Diploma in the same field, from the Federal University of Technology Owerri. He also has a bachelor's degree in International Studies and Diplomacy from Washington University in St. Louis. Prior to his entry into politics, Uzodinma was a businessman with vast business interests. He had the ceremonial title of Onwa-Netiri Oha of Omuma in Oru local government of Imo State.

Politics
In 1999, after the return to democracy, Uzodinma joined the People's Democratic Party (PDP), where he served as a member of the party's National Caucus, National Executive Committee and on the Board of Trustees, at various times between 1999 to 2017. As a party boss in Imo State, Uzodinma was a close associate of the Governor Achike Udenwa until late 2002, when ahead of the April 2003 elections he decamped to the Alliance for Democracy (AD), becoming the party's candidate for the Imo State gubernatorial election. After losing the election to Udenwa, he returned to the PDP in February 2004. He later contested the PDP governorship primaries in December 2006, coming in second to Senator Ifeanyi Araraume. In 2011, after the incumbent Governor Ikedi Ohakim joined the PDP, Uzodinma endorsed him to run for a second-term as Governor of Imo State, favoring him over Rochas Okorocha who he later won.

In January 2011, Uzodinma won the PDP senatorial primary for the Imo West, gaining 2,147 votes, while the incumbent Senator Osita Izunaso came second with 891 votes. Uzodinma was later disqualified by a federal high court judgment as he had not been cleared by the PDP electoral panel led by Nwafor-Orizu. In March 2011, a court of appeal issued a stay of execution while the case was being decided, leaving Uzodinma free to campaign. On 5 April 2011 the Court of Appeal upheld the federal high court judgement, Uzodinma later appealed this decision at the Supreme Court. In the April 2011 elections, Uzodinma received 85,042 votes, ahead of former Governor Achike Udenwa of the Action Congress of Nigeria (ACN) with 64,228 votes and Rajis Okpalan Benedicta of the All Progressives Grand Alliance with 57,110 votes. In May 2011, the Supreme Court overturned the earlier decisions and declared that Uzodinma was the valid candidate and therefore had been elected.

Senator
On 29 May 2011, Uzodinma was sworn-in as a Senator of the Federal Republic of Nigeria, representing Imo State (West Senatorial District). He was re-elected for a second term in the Senate during the 2015 election. In 2018, he left the Peoples Democratic Party and joined the ruling All Progressive Congress (APC) in order to contest for Governor of Imo State in the 2019 general elections.

Governor of Imo State
In March 2019, the Independent National Electoral Commission sitting in Imo announced the governorship election results of Imo State: Emeka Ihedioha of the PDP who won with 273,404 votes, Uche Nwosu of Action Alliance with 190,364 votes, Ifeanyi Ararume of the All Progressives Grand Alliance with 114,676 votes; and Uzodinma in fourth place with 96,458 votes. Uzodinma later challenged the victory of Ihedioha up to the Supreme Court. On 14 January 2020, the Supreme Court declared Uzodinma, the duly elected Governor of Imo State. The court held that results from 388 polling units were wrongly excluded from votes ascribed to Uzodinma and the APC in Imo adding that the first appellant Uzodinma holds the majority of lawful votes cast.

On 15 January 2020, he and Placid Njoku were sworn-in as the Governor of Imo State and Deputy Governor of Imo State respectively In his inaugural address, he ordered the states accountant general to provide a comprehensive financial status for the state from May 2010 to January 2020, he also ordered the permanent secretaries of all ministries in the state to forward the status of all contracts awarded, whilst halting the paying for all ongoing contracts.