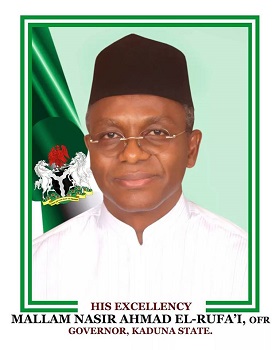 He attended Barewa College, where he graduated at the top of the class, winning the coveted "Barewa Old Boys' Association Academic Achievement" Trophy in 1976. He went off to Ahmadu Bello University, Zaria, earning a Bachelor in Quantity Surveying degree with First Class Honors. He also attended post-graduate programs at Harvard Business School and Georgetown University. He has an LL.B degree from the University of London, graduating in August 2008 with Second Class Honors, Upper Division, and a Master's Degree in Public Administration from the John F. Kennedy School of Government, Harvard University in June 2009. He also received the Kennedy School Certificate in Public Policy and Management having spent 11 months as an Edward A. Mason Fellow in Public Policy and Management from July 2008 to June 2009.

He established and ran what became a successful consulting practice, El-Rufai & Partners, between 1982 and 1998. He also held management positions with two international telecommunications companies, AT & T Network Systems International BV and Motorola, Inc. He served as the director general of the Bureau of Public Enterprises (BPE) and the secretary of the National Council of Privatisation where he spearheaded the privatisation of many government owned companies.

In October 2001, he was conferred a national honor, OFR (Officer of the Order of the Federal Republic of Nigeria) by the Federal Government of Nigeria while serving as the director general of the Bureau of Public Enterprises (BPE) and the secretary of the National Council of Privatisation where he spearheaded the privatisation of many government owned companies.

Mallam Nasir El-Rufai was appointed Minister of the Federal Capital Territory from 2003 to 2007. In 2005, he was conferred D.Sc (honoris causa) by the University of Abuja, Nigeria. By September 2007, the administration of late President, Umaru Yar'adua had appointed him to the National Energy Council; a post he resigned from in June 2008.

In May 2015, he contested in the gubernatorial election under the membership of the All Progressive Congress (APC) and emerged winner, hence Governor of Kaduna State.