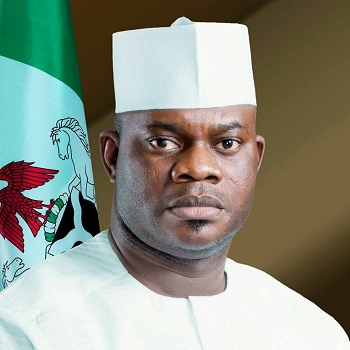 Yahaya Bello was born on June 18, 1975 in Agassa, Okene LGA. He had his primary education at the LGEA Primary School, Agassa, and was made the class prefect from class two all the way to class six when he was appointed head boy.

He got a Bachelor’s degree in Accounting and a Master’s degree in Business Administration from Ahmadu Bello University (ABU) in 1999 and 2004 respectively. He became a Chartered Fellow of the Association of National Accountants of Nigeria (ANAN) at Jos in 2004.

He spent his NYSC year at the Revenue Mobilization Allocation and Fiscal Commission (RMAFC) in 2002 and was retained. He was subsequently appointed as Revenue Officer and then promoted to Accountant within a short period. He later attained the post of Assistant Chief Accountant before leaving the commission.
He is the managing director of FairPlus International Limited and the chairman of Kogi Youth Arise Forum.

On December 6, 2015, Yahaya Bello was declared winner of the Kogi State gubernatorial elections, after replacing former APC candidate, Abubakar Audu, who died on November, 22, when the election was declared inconclusive.