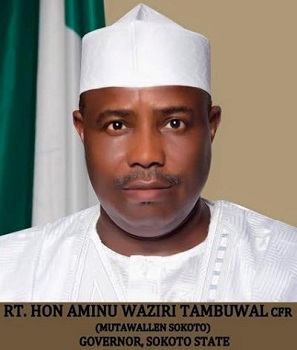 He attended Tambuwal Primary School, Tambuwal, Sokoto State, where he obtained his First School Leaving Certificate in 1979. He proceeded to the Government Teachers’ College, Dogon-Daji, where he obtained the Teachers Grade 11 Certificate in 1984. He attended Usman Dan Fodio University, Sokoto, where he studied Law, graduating with an LLB (Hons) degree in 1991. He completed his one year compulsory legal studies at the Nigerian Law School, Lagos, obtained his BL and was called to the Bar in 1992. He also attended several courses abroad, among which were: Telecoms Regulatory Master Class–Bath United Kingdom in 2004; Law making for the Communications Sectors –BMIT, Johannesburg, South Africa in 2004; Regulating a Competitive Industry-United Kingdom, Brussels in 2005; Tulane University – International Legislative Drafting in 2005; Stanford Graduate School of Business – Influence and Negotiation in 2008 and Kennedy School of Government, Harvard – Infrastructure in Market Economy in 2008.

His political career started in 1999, working as Personal Assistant on Legislative Affairs to Senator Abdullahi Wali, the then Senate Leader. In 2003, ran for a legislative seat as representative of the Kebbi/Tambuwal Federal Constituency. He was elected into the House of Representatives on the platform of the All Nigeria Peoples Party (ANPP). In 2007, he defected to the Peoples Democratic Party (PDP), alongside the former governor of Sokoto State, Attahiru Bafarawa. However, when the PDP denied return tickets to former ANPP legislators, Right Hon. Aminu Waziri Tambuwal swung back to the ANPP, where he eventually succeeded in picking up a ticket for the election. He has held several offices in the House. In 2005, he became the Minority Leader of the House until he defected to the PDP. Upon his re-election to the House in 2007, he was also elected the Deputy Chief Whip. He was the Chairman of the ad hoc committee that reviewed the report of the controversial power probe committee headed by Ndudi Elumelu; Chairman, House Sub-Committee on the Bill for an Act to Amend the Land Use Act, and acting Chairman, House Committee on Power.

He was leader of the Nigerian delegation to African,Caribbean, Pacific & European Union Parliamentary Assembly (ACP-EU) and served as Vice-Chairman, Economic Committee ACP-EU, held in Prague,Czech Republic in April 2009.

In 2011, he was elected Speaker of the House of Representative, a position he occupied till 2015 when he contested under the membership of the All Progressive Congress (APC) for the gubernatorial elections and emerged winner.