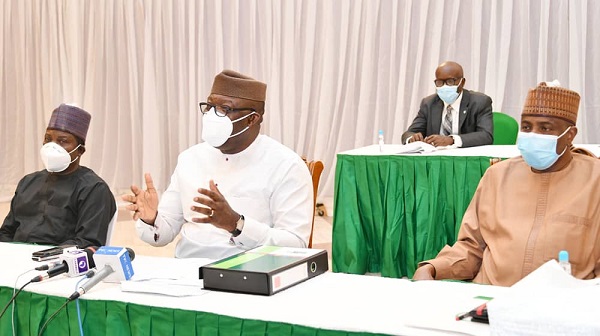 Concerns over insecurity in the country reached a feverish point yesterday as bandits launched another attack in Niger State.

Yesterday’s attack took place in Magami, Kokki and Kurebi communities in Gurmana ward of Shiroro Local Government Council of the state. Five persons were killed and 40 abducted in the operation, which lasted for hours. It came few hours after bandits attacked and abducted students and teachers from Government Science College, Kagara in the state. The state government released names of students, teachers, non-teaching workers as well as families members abducted during the attack on February 17. The list is made up of three teachers, two non-teaching employees, 27 students and nine family members.

It was gathered from eyewitnesses in Shiroro that many sustained gunshot injuries and were rushed to health facilities for attention.

Amidst the gloom and despair, hope for redress was dimmed yesterday by immediate past service chief, Lt. General Tukur Buratai as he declared that Boko Haram terrorist acts might not fizzle out in the next 20 years.

Buratai spoke during the screening yesterday of ex-service chiefs by the Senate Committee on Foreign Affairs. He stated that poor infrastructure, inadequate protection of the country’s over 1000 forests were among factors threatening successful fight against terrorism, banditry and kidnappings

Buratai told the committee it would be difficult to win the war within 20 years unless the problems, which he said included, poor education, particularly in the North, were addressed.

Reacting, the governors of 36 states, agreed to dedicate portions of the Excess Crude Account and the Natural Resources Development Fund or the Economic Stabilisation Fund to equip security agencies in the fight against insecurity in the country.

The governors, who held an emergency meeting under the aegis of the Nigeria Governors’ Forum (NGF) at the Presidential Villa, Abuja, Wednesday night said the decision would address “the impunity associated with all of the crimes and criminality” in the country.

Chairman of the Forum, and Governor of Ekiti State, Kayode Fayemi, briefed newsmen midnight and said the meeting reviewed the challenge of resources to the country’s military institutions. He welcomed President Buhari’s appointment of new service chiefs.

“We are fully supportive of the work they have promised to do. We hope that new security architecture will emerge from this new leadership,” Governor Fayemi said.

He added: “Governors are irrevocably committed to the protection of life and property in our states and we are full of sympathy to those who have lost lives and property.”

Fayemi said the forum made it clear during the meeting that crime and criminality should comprehensively be prosecuted wherever they occurred without ethnic, religious or any other colouration.

ALSO, the National Economic Council (NEC) on Thursday resolved that states should incorporate non-indigenous/minority residents to local security initiatives so as to ensure adequate representation.

NEC, presided over by Vice President Yemi Osinbajo, also resolved that victims of herders/farmers clashes whose properties were destroyed in their respective areas should be paid compensation.

This was part of the decisions reached at the council’s meeting at the Banquet Hall of the Presidential Villa, Abuja.
Governor of Ogun State, Dapo Abiodun, while briefing newsmen after the meeting said the council was committed to the protection of all residents wherever they reside without discrimination, adding that governors would also ensure that criminals were arrested and sanctioned.

Abiodun, joined by Governor Atiku Bagudu of Kebbi State said NEC also resolved there must be public condemnation of hatred against minority groups, just as it advised that members of non-indigenous groups should be incorporated into local security groups.

On security and implementation of community policing, Abiodun quoted the Chairman of Nigeria Governors’ Forum and Governor of Ekiti State, Kayode Fayemi, as saying, among others, that they are committed to “ensuring that local security initiatives whether they are states, government… agencies or local vigilante groups or the community policing programme of the Nigerian Police are inclusive and are composed with consideration given to adequate representation of non indigenous minority resident communities.”

Earlier yesterday, the Northern States Governors Forum had declared it was distressed and saddened by attacks and abductions, particularly the abduction of students, staff and families of the Government Science School, Kagara in Niger State by suspected bandits.

Chairman of the Forum and Governor of Plateau State, Simon Bako Lalong, in a statement, condemned the abduction of the students, describing it as a heinous crime and another sad day in the history of the nation.

Meanwhile, Christian Association of Nigeria (CAN), Benue State chapter, has called on President Muhammadu Buhari to stop the issuance of ‘visa on arrival’ to foreign herdsmen to enable Nigerian security agencies check the influx of militia herdsmen and other security challenges.

The chapter Chairman of CAN, Rev. Akpen Leva, who made the call yesterday at a press conference in Makurdi, said the visa policy given to militia herdsmen worsened the security situation in the country. Similarly, the abduction has become a source of concern for the United Nations Children’s Fund (UNICEF) .

The leadership of the International organisation has called for the immediate and unconditional release of any children missing.

The UNICEF Nigeria representative, Peter Hawkins, who made the call, yesterday, via a press statement said: “UNICEF is aware of reports that armed men attacked the Government Science College in Kagara, in Niger State, Nigeria. “

Demanding their release and “their safe return to their families “ UNICEF, according to Hawkins “condemns in the strongest possible terms any attack on a school.”

The demand for the rescue of the schoolchildren came as the Niger State Police Command received no fewer than additional 300 special mobile force.

The state Commissioner of Police CP Adamu Usman made this known while he welcomed the Operation Puff-Adder 11 yesterday in Minna, saying that it would be community-driven operation aimed at re-dominating and reclaiming the public space from the criminals.

By Matthew Ogune,
The Guardian