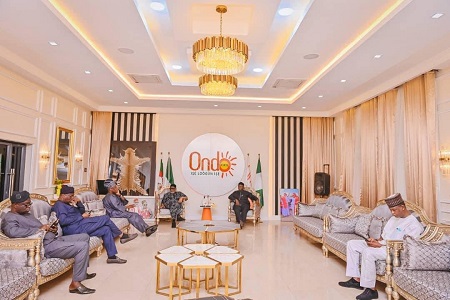 The Head of Media and Public Affairs of the Nigeria Governors’ Forum (NGF), Mr. Abdulrazaque Bello Barkindo made an appearance on “Radio Now,’’ to discuss the NGF stance on the attack at the Saint Francis Catholic Church in Ondo State.

The forum was in Owo to condole with the government and the people of the state. Mr. Barkindo said that the Nigerian governors were disturbed that such a gruesome and heinous thing could happen.

“It’s awful to know that people would just wake up on a Sunday morning, get up and get dressed, and then killed. That’s like moving from the sanctuary to the mortuary. The Governors were really disturbed by that,’’ he said.

To address the issues of insecurity, the Head of Media and Public Affairs at the NGF said there were big promises by the Chairman and his counterparts/ brother Governors.

“The federal government is taking steps and the Governors forum is making sure to assist to make sure that the perpetrators are apprehended and made to face the consequences and full wrath of the law. Apart from that, it’s important to make sure that people get their lives back.”

Mr. Barkindo said there were a lot of people they saw in the hospital at Owo. As a result, the Chairman of NGF: Dr. John Kayode Fayemi ordered his Commissioner for Health to make sure that he provides assistance from Ekiti State to Ondo State.

The assistance would be in the form of medical personnel and medicines and many other things.

“Also, of course, Owo happens to be the hometown of the Ondo Governor, Mr. Oluwarotimi Odunayo Akeredolu and he is also putting all hands on deck to make sure equipment and medical personnel are provided,’’ he said.

Furthermore, to tackle the issues of insecurity, Mr. Barkindo addressed the issue of implementing state police.

“Nigerian Governors have been agitating for state police. I don’t want to be critical of the Nigerian Police force, but you can see that none of the survivors gave any credit to the Nigerian police especially as far as response time is concerned,” he said.

He added that such a thing can’t happen in any other society in the world where the police do not respond in less than ten minutes.
“We live in very precarious situations and such a thing would cause people to advocate for more local policing around the country and not just in Ondo State but everywhere else,” he said.

He added that the NGF has been ahead and at the forefront of agitating for state police. To conclude, he said that the Governors have given many compelling reasons to start state policing.

“The early we have state police, the better we patrol our community in this country,” he stated.