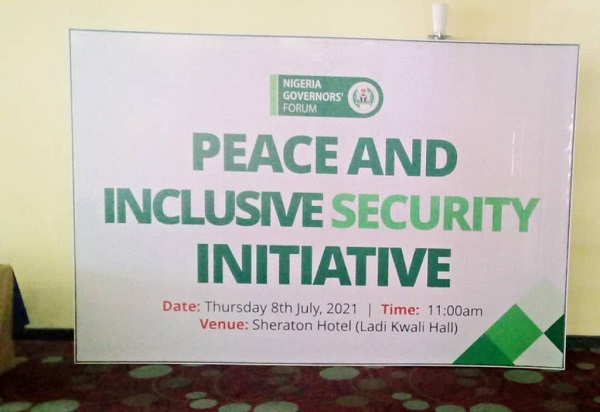 Nigerian governors will on Thursday, launch the maiden Peace and Inclusive Security Initiative in attempt to find solutions to the intractable security challenges in the country. The event, which is under the auspices of the Nigeria Governors’ Forum (NGF), according to the Head, Media and Public Affairs, AbdulRazaq Bello-Barkindo, is aimed at tackling insecurity, conflict and violence in the country.

“The event is aimed at tackling insecurity, conflict and violence which has become a daily activity by bandits and terrorists all around the country,” the statement added.

It stated that the peace keeping initiative would “provide a platform for sharing experiences on government, civil society initiatives testing practicable ideas and pushing for implementation of innovative solutions to conflict and insecurity.”

According to the statement, the objectives of the meeting are to set an agenda on peace and stability especially at the sub-national levels.

“It would support decision-making on security at the national level through the National Economic Council. It will help in identifying the drivers of insecurity at all state level and stimulate collaborative response by stakeholders.

“There would be a high-level advocacy for peace and inclusive security among governors and government institutions at federal and state levels.

“The initiative would also promote networking and synergy amongst state and non-state actors to enhance peace and inclusive security,” it added.