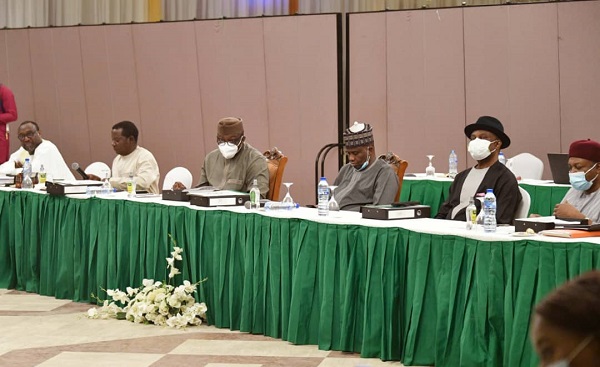 The 36 state governors under the aegis of Nigeria Governors’ Forum (NGF) have expressed the need for special review of the entire gamut of the security issues, sequel to the unabated cases of killing of soldiers and civilians across the country.

The forum which condemned the recent attack on the correctional facility and the Police Command headquarters and the release of prisoners in Imo State, and successive acts of violence and insecurity across the country, and the killings of soldiers in Benue State, underscored the need for further engagement of federal authorities both at the political level and federal authorities at the security level with a view to deal with these multifaceted challenges.

While frowning at the prevailing situation, the NGF Chairman, Governor Kayode Fayemi has applauded measures taken by subnational governments in curtailing rising security challenges bedevilling the country, ranging from insurgency, banditry, kidnapping and other social vices.

Governor Fayemi of Ekiti State stated this at the post-NGF’s monthly meeting held at the Banquet Hall of the State House, Abuja on Wednesday night.

While giving the update, Governor Fayemi said: “The meeting basically reviewed a whole variety of issues on security on the economy. I’m sure you’re waiting for it, Executive Order 10 and associated matters.

“The forum has resolved on a number of issues to take forward both with the committee responsible for legislative and judicial autonomy, of which we have members that have been representing us.

“On security issues, members are particularly worried following what happened in Imo State, the attack on the correctional facility and the Police Command headquarters and the release of prisoners, and successive acts of violence and insecurity across the country, and the killings of Soldiers at Benue.

“The Forum has expressed its worry that it’s time for us to revisit comprehensively, the nature and depth of this security crisis, which would have gotten worse if States had not been taking the actions they’ve been taking individually and collectively.

“It is the steps taken at the State level that I’ve managed to reduce the depths and the enormity of the security challenges.

When asked about the specific positions of the governors, the NGF chairman who declined to disclose the resolution said: “I am not at liberty to discuss the details of those positions until we’ve discussed it with those that are directly involved in it.”

READ MORE ON OUR SOCIAL MEDIA PAGES BELOW: