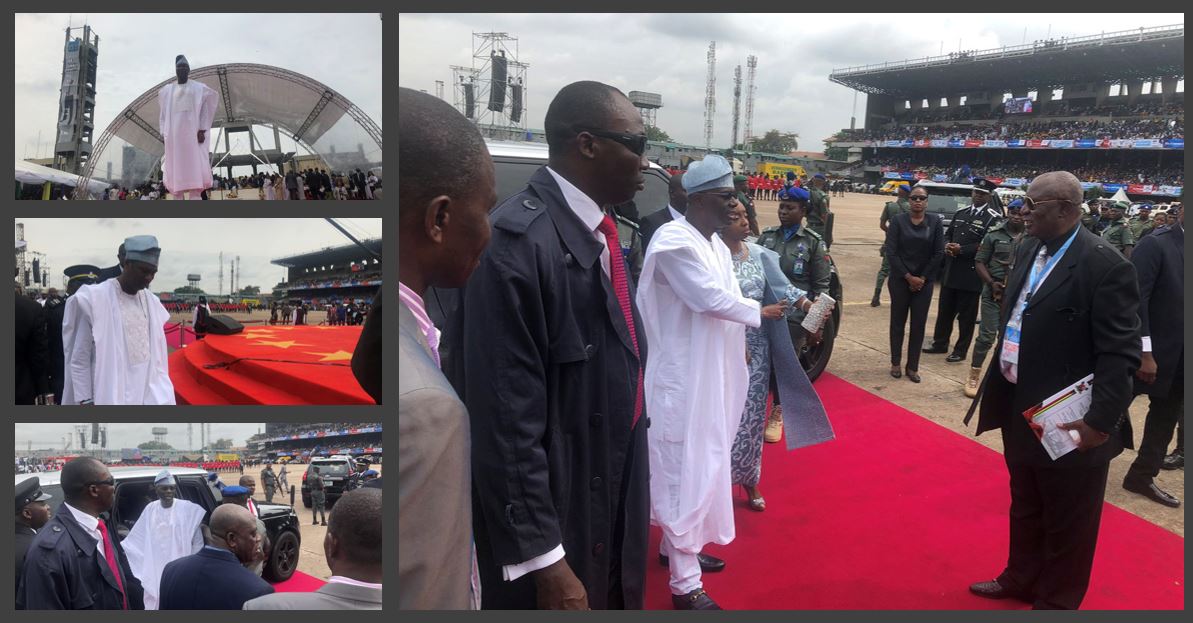 Sanwo-Olu, accompanied by his wife and children, stepped to the podium amid wild ovation at about 11.23am and 11.31 am he took his oath of office as he was sworn-in subsequently, by the Chief Judge.

Also about 11. 15 am Hamzat took his oath of office, allegiance and was sworn-in, thereafter by the Chief Judge. The out-going Lagos State Governor, Akinwunmi Ambode had excused himself from the Inauguration ceremony of Governor-elect, Babajide Sanwo-Olu’s, saying, he would not want to take the glory off the new governor.

His deputy, Dr Idiat Adebule was, however, present at the event which was filled to capacity. The Deputy Governor-elect, Obafemi Hamzat also took salute from the police guard at about 10.10am.

Prominent Nigerians and indigenes of the state were also in attendance. Sanwo-Olu, clad in flowing white “Agbada” and his wife made their way into the venue at exactly 10.30 am.

Chief Judge of Lagos State, Hon. Justice Opeyemi Oke among other dignitaries were in attendance. The National Anthem was rendered at exactly 10.38 am to signal the commencement of the programme Pastor Kolawole Odukoya, General Overseer of Mountain of Fire Ministry, MFM, and Chief imam of Lagos offered the opening prayer.

In a statement released by Ambode, through his Chief Press Secretary, Habib Aruna, stated: the outgoing Governor of Lagos State, Mr. Akinwunmi Ambode, congratulated his successor, Mr. Babajide Sanwo-Olu, saying the new Governor deserves to enjoy his historic day without having him share in the glory with him.

In a veiled reference to why he would not be attending the formal inauguration of Sanwo-Olu and his deputy, Hamzat, Ambode said Sanwo-Olu should be allowed to be the star of his inauguration.

“I have already formally handed over reigns of power in the State to the new Governor in a most cordial and convivial ceremony at the State House yesterday. The formal inauguration should have Mr. Sanwo-Olu as the star of the day.

I don’t think that glory should be shared with him by my presence,” Ambode said.

Ambode said he has had a quality private moment with his successor and he was confident that with the prayers, cooperation and collective support of all Lagosians, the new government would succeed in the excellent tradition of progressive governance which Lagos State is known for.