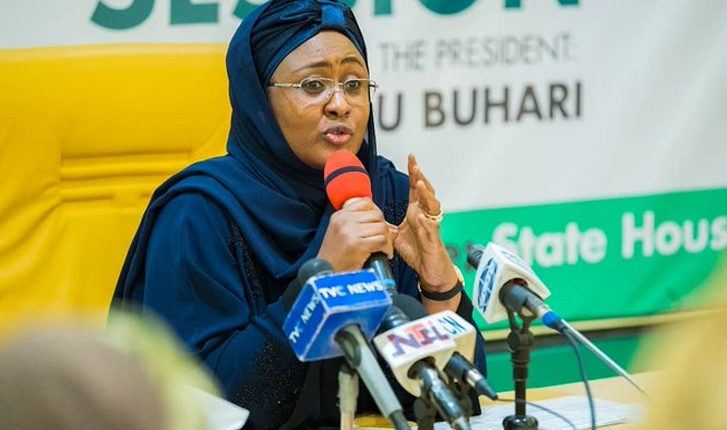 The First Lady, Aisha Buhari has listed adequate funding and the harmonisation of existing laws as key to fight against Gender Based Violence (GBV) in Nigeria.

The policy dialogue with the Nigerian governors wives against gender based violence is meant to reflect on the issues and the development.

The governors wives have also adopted an action plan which each first lady will domesticate to reflect their respective environments.

The First Lady while commending state governors for declaring state of emergency against Gender Based Violence in June.

“I want to thank your excellences for improving the situation of Nigerian women and children through laws, policies and mechanism that seek to promote women’s human rights, which you all remain our driven force at the state level in this struggle.

“But, as Oliver Twists, our concern is funding and harmonisation of existing laws to incorporate emerging issues as they reflect in different states,” she said.

Mrs. Buhari also commended the wives of the governors for giving priority to fight against GBV, especially in the wake of COVID-19 in Nigeria.

The first lady assured of her commitment in working with the governors wives in the fight against Gender Based Violence in the country, adding that one of the outcome of their partnership was the interactive programme.

The Wife of Ekiti State Governor and Chairperson of NGWA- GBV, Bisi Fayemi said that in recent times there had been astronomical increase in cases of gender based violence in Nigeria.

She noted that COVID-19 and the lockdown escalated the already problematic situation as rate of violations increase exponentially.

Mrs. Fayemi said the ugly trend has made it imperative to scale up multi-dimensional approaches and strategies in combatting all forms of gender based violence in the country.

She listed some of the reasons for the gender based violence against women to include underlined cultural norms, altitude and believe that promote physical, sexual and economic violence.

Others include culture of impunity, lack of access to justice, nonexistence or poor facilities and economic disparity.

Fayemi said that NGWA- GBV formed by a group of 25 governors wives in June 2020 had recorded a lot of achievements, including the declaration of state of emergency for GBV in Nigeria by the governors on June 10.

She said that as a result of the declaration all state governors now focus attention on actions to address GBV in the state.

“This include to ensure that all relevant legislation is passed and the implementation of exiting laws and polices.”

She said that the wives of the governors had also developed an action plan which was launched at the occasion.

“Each first lady is adapting the contents of this action plan to suit our own contents and environment.

“The action plan covers strategies such as access to justice, support for survival, education and awareness, engaging communities, pair learning and partnership with various stakeholders. “

Fayemi said that the association had also scale up advocacy for the domestication of VAPP) Act 2015 and the Child Rights Act.

She said that since June when the state of emergency was declared against sexual and gender based violence, additional six states had domesticated VAPP Act 2015.

The States according to Fayemi include Delta, Bauchi, Akwa Ibom, Kwara, Abia and Niger, adding that the legislation are in advanced stage in several states.

She expressed hope that more states would domesticate it before the end of the year.

Edward Kallon, the United Nations Resident Coordinator and Humanitarian Coordinator in Nigeria, commended the declaration of emergency on GBV by governors in June.

Kallon, represented by UN Women Nigeria Country Representative, Comfort Lamptey, said the declaration was an indication of what women could achieve working together.

“This unprecedented declaration provides clear demonstration of the important political feets, which women leaders can achieve when they come together to boldly advocate for women’s rights, and gender equality.

“I believe we can draw a pattern and lessons from this strategy to tackle other persistent ‘states of emergency’ on women’s rights in Nigeria, most notably the low representation of women in elected political office, which currently stands as the lowest in Africa.

“So this indeed is a call to action”, he said that going forward, alliance building continued to serve as a core part of the strategy of the Nigeria governors wives forum to address the state of emergency on GBV.

The NGF Chairman and Governor of Ekiti State, Kayode Fayemi said that: “The enforcement and the enactment of the law is critical. We have a name and shaming policy. We also have a protection mechanism for the victims.

“We set a 208 bed-shelter transit home and skills acquisition centre for women who have gone through domestic abuse and sexual violence.”

The event was attended governors of Plateau, Kogi and among others, as well as wives of state governors and other stakeholders.

By Juliana Taiwo-Obalonye,
The Sun Newspaper