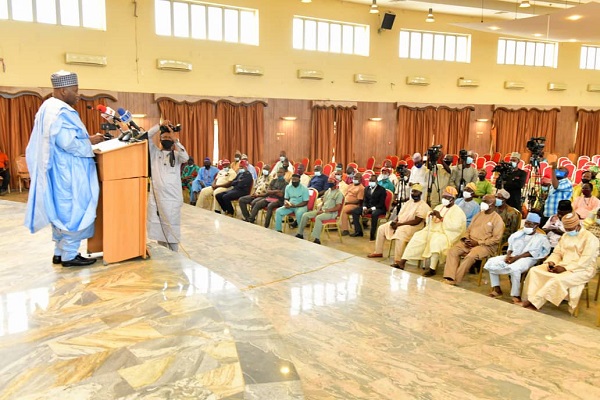 Presenting recommendations to that effect contained in a report of the House Committee on Appropriation on the floor of the House, the Chairman of the Committee Aliyu Baba Manu said this year’s Budget Estimate is derived from Gombe State Development Plan (DEVAGOM) 2021-2030, Medium Term Expenditure Framework (MTEF), Fiscal Strategy Paper (FSP) and Budget Policy Statement (BSP) 2022-2024 with Macroeconomic assumptions of Oil production of 1.8 Million Barrels Per Day at $57 per barrel, the exchange rate of N410.15 to a US Dollar and Mineral Ratio of 31% taking cognizance of the expected Inflation Rate of 13.50% among others.
He said the Budget is made up of a Capital Expenditure of Eighty-Three Billion, Four Hundred and Ninety-Three Million, Four Hundred Thousand Naira (N83,493,400,000.00) representing 53.9% and a Recurrent Expenditure of Seventy One Billion, Four Hundred and Seventy Million, Five Hundred and Sixty Four Thousand Naira (N71,470,564,000.00) representing 46.1%.

After a thorough debate, the House approved the size and the sectoral allocations of the 2022 Budget as well as all the Virements made in the 2021 Budget as recommended by the Appropriation Committee.

Speaking shortly after the passage of the Budget, the Speaker, Rt Hon. Abubakar Mohammed Luggerewo commended the Appropriation Committee for presenting an articulate report that guided the House in taking informed decisions despite the short time given to it.

He commended Governor Muhammadu Inuwa Yahaya for the good performance in the implementation of the 2021 Budget and proposed a people-oriented 2022 Budget with a Capital to Recurrent Expenditure Ratio of 53.9 to 44.1 percent taking cognizance of macroeconomic indices.