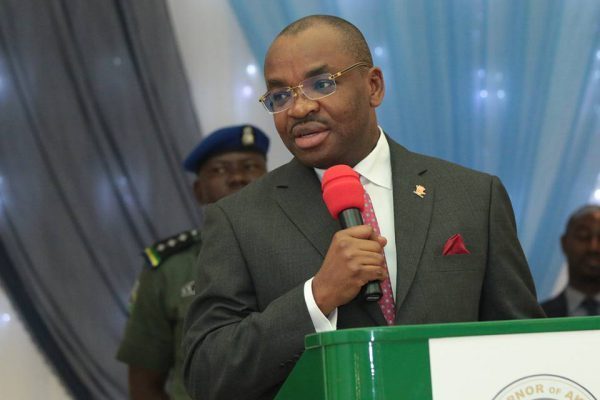 The Governor of Akwa Ibom State  Mr. Emmanuel Gabriel Udom  has said that the 5 per cent on oil derivation demanded by Southern Governors was not too much considering the devastating effect on members of such communities.

The Governor stated this while fielding questions from Journalists on Saturday on the sidelines of the 22nd Graduation Ceremony at  the El-Amin International school Minna, Niger State.

Governor Udom, however, lamented that three percent was too little considering the pollution of the waters in the region, responsible for the inabilities of Fishermen to fish again  and the environmental  hazards being faced by  members of oil producing areas are subjected to.

According to him, their fishermen can no longer earn a living because of oil spillage while their farmers too cannot farm in their farmlands in addition to numerous challenges confronting members of oil communities.

He, however, maintained that five percent of profit of Nigeria National Petroleum Corporation (NNPC) is never too much especially if people need to see the myriads of challenges this person from oil communities goes through.

Mr. Udom Emmanuel said members of the National Assembly have performed their duties and that the Southern Governors cannot take away their function, stressing that members of oil producing communities in the Niger Delta, also have a function to perform for maximum benefits.

According to him, the Southern Governors will study it carefully adding that what they wished for Nigeria was the very best at the end.

It could be recalled that members of the Senate and House of Representatives have passed the Petroleum Industry Bill (PIB) recently but however differed on recommendations on funds for host communities that has become a subject of discussion.