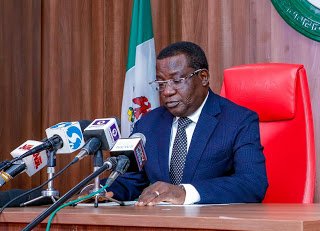 Plateau Government has procured 50 Hilux Vans and trained 500 police constabularies as part of its efforts to improve security in the state.

The State Commissioner for Information and Communication, Mr Dan Manjang, disclosed this in an interview with the News Agency of Nigeria (NAN) on Wednesday in Jos.

He spoke on the achievements of Gov. Simon Lalong Administration ahead of the celebration of Nigeria’s Democracy Day on June 12.

He restated the State Government’s commitment to improve security in the state, and also disclosed that the State Executive Council had approved the purchase of 200 motorcycles to augment the state’s facilities in curbing crime in the area.

“ We met a chaotic security situation, we established the Plateau Peace building Agency, the first of its kind in Nigeria,”Manjang said.

He explained that the more than 500 constabularies trained across the 17 local government areas in the state were to augment the formal security agencies’ efforts in information and intelligence gathering, which he said, had been helpful in reducing crime .

“At the home front we have strengthened Operation Rainbow which is the semblance of state police, we have established the prototype security outpost and surveillance centre, at Dutse -Uku community in Jos North Local Government Area for the organisation,“ he said.

The commissioner said the Security Outpost and Surveillance Tower which had an Armoured Personnel Carrier was designed to detect, prevent and minimize crime within the Dutse Uku, Jos Jarawa and the Jos general area by providing a grassroots-based intelligence gathering system to assist security agencies in responding effectively to distress calls within the Jos metropolis.

He said the state government had also completed many infrastructure development projects such as roads and hospitals which were abandoned by the previous administration.

“ We inherited a lot of roads which we completed, prominent is the secretariat round about flyover, to Maraban Jama’a which we completed. We also introduced our own roads, operation zero potholes which you know in the Jos metropolis.

“What stands out in this administration is the 22 projects of `the Lalong legacy projects`. It comprises of model primary and secondary schools across the three senatorial zones and the completion of hospitals which are no less than 60 beds.

The commissioner explained that some of the projects would either be commissioned or inspected, as part of activities to mark the Democracy Day to be celebrated on June 12.

He also said that 50,000 youths had been empowered through various collaborations with agencies on skills acquisitions and award of grants

“Also, 50,000 youths have been trained on the Plateau through collaborations with the Industrial Training Fund, N -power, Plateau Micro, Small and Medium Enterprises Development Agency, and other social intervention programmes of the federal government.

”This is to give employment and reduce dependency on while collar jobs which are scarce,“ he said.

Manjang urged the people of the state to cooperate with the state government to enable it to provide more dividends of democracy to them.