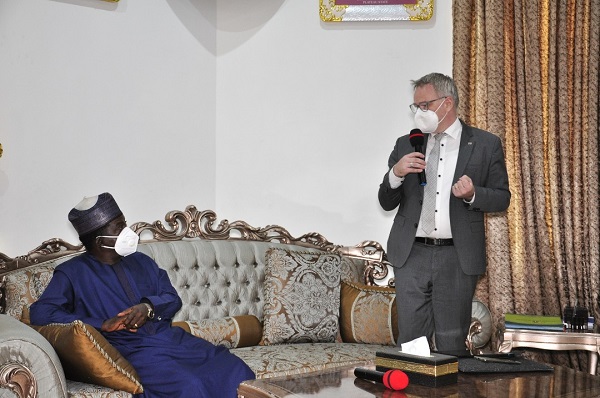 The German International Development Agency (GIZ) says it will continue to support Plateau State in capacity building that will facilitate the creation of more jobs and economic opportunities for citizens of the State.

The new GIZ-SEDIN Head of the Programmes in Nigeria Markus Wauschkulm gave the commitment when he visited Governor Simon Lalong at the New Government House Rayfield Jos on a familiarisation visit to the State.

He said the partnership between GIZ and Plateau State runs deep and has positively affected many people in various areas especially agriculture value chain development, peace building and job creation.

Wauschkulm said the success of the programme in the country is very evident in Plateau State as many have been trained and given capacity to engage in economic activities that are generating income and tackling unemployment.

Governor Lalong appreciated the German Government for its intervention in Nigeria and Plateau State through its laudable initiatives of the Pro-poor Growth and Promotion of Employment in Nigeria-SEDIN.

The Governor said the State Government has enjoyed support of GIZ in strengthening its agencies such as the Peace Building Agency, Plateau Small Interprises Development Agency (PLASMIDA), One-Stop Investment Centre, Project Monitoring and Result Delivery Unit among others.

Lalong said the State Government will continue to follow up on those who have been empowered through the support of the GIZ in order to ensure that they give others the value that they have obtained from the programme.