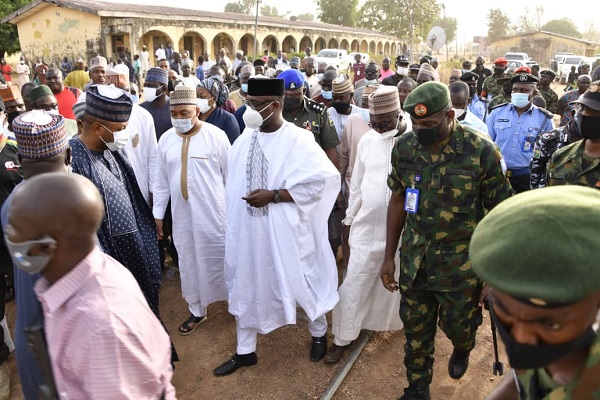 Governor Abubakar Sani Bello has paid a visit to Government Science College, Kagara in Rafi Local Government Area of Niger State where 27 students and 15 others were abducted by armed bandits.

Governor Sani Bello consoled the family of the student that was killed during the invasion by the bandits while assuring the relatives of the kidnapped victims of their safe return as government is on top of the issue.

"Our priority right away is to get the kidnapped students and 15 others, as well as the NSTA abducted victims unharmed", he said.

He said kidnapping has become a daily occurrence in the state and called on the Federal Government to intensify efforts and employ a new strategy to checkmate the menace.

According to him, payment of Ransome is not part of the state government's policy as obliging to the bandits demands will only but empower them with the resources to purchase more arms.

The Governor added that he was opened to any other form of negotiations including giving a new lease of life to the bandits who chose to abandon their criminal tendencies and embrace positive and humanistic lifestyle.

He expressed gratitude to the Federal Government for the swift response assuring that he would remain constantly in contact with the presidency on the security issues in the state until it is rid of these miscreants.

The Governor directed that the school be secured and rehabilitation work carried out on its structures while the management of the school should keep monitoring the students.

Earlier, Dan'asabe Ubaidu, the principal of the college narrated how the incident occurred to the Governor and the number of students that became victims to the armed bandits.

Ubaidu said that the 15 abducted were staff of the college and their relatives comprising of four male, four female and seven children.

Governor Sani Bello, along with his Deputy, Alhaji Ahmed Mohammed Ketso, Members of the State Executive Council and high-profiled security officers were part of the visitation.

The College, established in 1969, presently has a total of 650 students.