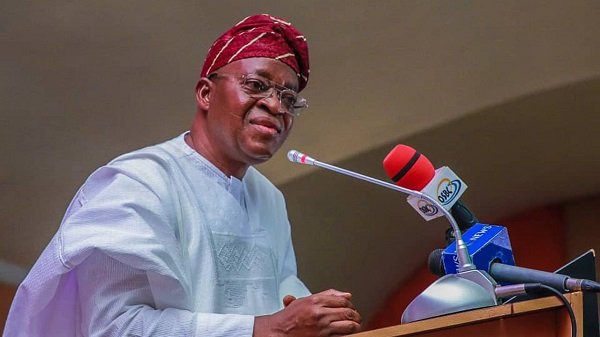 Osun State is largely a civil servant State. Since the creation of the State in 1991 they have been the drivers of the economy.

A few days ago, the Osun State Governor, Adegboyega Oyetola, took a bold managerial decision by changing the narrative of the welfare of Osun workers.

Recall tthat the State Government announced the approval of the new minimum wage for civil servants in the State effective from November 1 this year.

Despite the Covid-19 pandemic, #EndSars protest and the violence that have really affected the economy in the country, the Administration of Adegboyega Oyetola has taken it upon itself to improve the welfare of workers in the State.

As at the time of filing this report, only five governors have signed the new minimum wage. They are:

With the signing of the new minimum wage by Governor Oyetola, Osun becomes the sixth governor in the country to put smile on the faces of its workforce.

Unfortunately, shortly after the announcement of the signing of the minimum wage, naysayers went to town with rumours that the increments on salary are as paltry as N1000, N700, etc.

In order to put a lie to this wicked rumour and put out the truth in the public space, our correspondent took a tour of some of the agencies of government to know exactly the increment ratio and to feel the mood of workers over this development.

Our findings reveal that, contrary to the innuendos of the naysayers, the new increment is substantial. For instance, under the old salary regime, a Level 6 Step 7 officer takes less than N30,000 as salary in the State in the old salary regime. With the new approval in which Mr. Governor has agreed to make use of one of the outstanding promotions, such an officer will be going home with N44, 000; that is, the new level will be Level 7 Step 7.

It will be recalled that workers were granted nominal promotion by former adminstration (without cash backing). But now, the New Salary structure for all workers has increased. The governor approved promotion for workers and between N15,000 and N20,000 will be added to workers’ salaries.

The salary of staff on Level 7 step 7 is now N44,000 under the current Administration effective from November 1, 2020.

Every year, civil servants statutorily move to another step. But the last time they had annual increment in Osun was in 2013, hence, workers have remained on same spot since 2013 till date.

But with the new approval, workers will begin to get their annual increments annually effective from January, 2021.

Some of the workers we interviewed, who pleaded not to be mentioned due to the nature their work, were full of joy and gratitude.

They described Mr Oyetola as a man of his word who doesn’t joke with people’s welfare.

“We did not expect this at this critical period when the whole world is faced with Covid-19 challenges. Mr. governor has done wonderfully well and we shall forever be grateful for this gesture.”

In the same vein, the Administration of Gboyega Oyetola has lifted embargo on promotions and conversions for workers in the State.