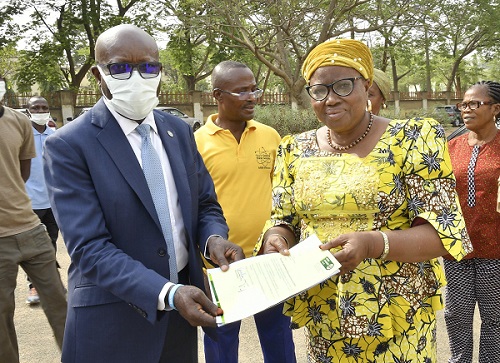 Officials of the Model Secondary School Maitama Abuja could not believe their eyes when a whole retinue of NGF staff led by their` Director-General, Mr. Asishana Bayo Okauru strolled into their premises bearing bountiful goodies in support of education.

Officials of the Model Secondary School Maitama Abuja could not believe their eyes when a whole retinue of NGF staff led by their` Director-General, Mr. Asishana Bayo Okauru strolled into their premises bearing bountiful goodies in support of education.

The idea of the management of the NGF was to aid them in creating an enabling environment for study through the renovation of the school and to equip the institution by donating science equipment and computer lab materials in order to embellish the schools already proven high standard of erudition.

The gesture is in demonstration of the Nigeria Governors’ Forum’s strong belief in education and its determination towards supporting Nigerian youths to attain lofty education standards and collectively strive for higher pursuits.

In its letter to the principal of the school, the NGF stated that as part of its corporate social responsibility, it is delighted to hand over a renovated laboratory, and ICT equipment for the school’s computer lab among other modern tools. These materials, the NGF hoped would go a long way in improving the quality of education in the school.

It is imperative to note that the NGF did not have to go far to make the donation as it provided this golden handshake to a school just across the fence from its secretariat’s premises in Maitama, Abuja.

The school equipment was received by the Principal of the Model Secondary school, Mrs. Emagum Elizabeth Goodwill, and the Vice Principal, Academics, Mr. Ojini Vincet Chibuzo. 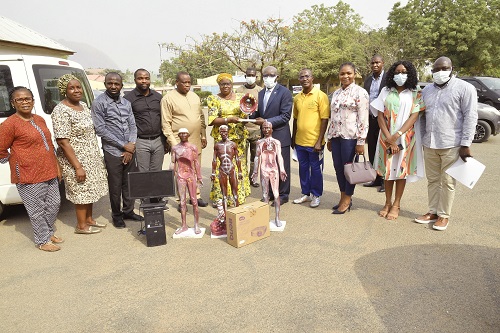 Reacting, the Principal and Vice-Principal, Academics were both elated to receive the instructional materials as they said that it would go a long way in aiding the students in their studies. The Vice-Principal, Mr. Ojini revealed that prior to the NGF’s donations, the school did not have functioning computers.

“We didn’t have computers. These come as a great help, especially for the students writing WAEC,’’ he said, adding that before now, the school had usually requested the students to bring their personal computers to accomplish their classwork.

Mr. Ojini was full of commendation for the NGF and wished that the NGF would extend the same support to other public institutions in Nigeria.

The DG of the NGF, Mr. Asishana B Okauru, applauded the principal for the maintenance of a positive and conducive learning environment at the Maitama Model Secondary School and said that NGF was more than glad to lend its support to encourage academic excellence.

In-house at the NGF Secretariat, the NGF had only recently recruited an Education Analyst in the person of Dr. Ebenezer Leo the Great, to serve as the Head of Education at the Nigeria Governors’ Forum Secretariat.

Through the NGF, Leo the Great would coordinate and contribute to NGFS interventions in educational development across the federation.

He stated that when it comes to education, the biggest challenge is what the sub-nationals would need to do more to resolve the encumbrances that are inimical to primary, secondary, and tertiary institutions’ development.

He added that NGF is the right platform to create more synergy and in his role, he seeks to engage and collaborate with stakeholders, the federal ministry of education, the respective states, the national assembly, and state houses of assembly and MDAs to put education back on the right path.
Furthermore, the forum has engaged with associations such as the Joint Action Committee of the Non-Academic Staff Union of Educational and Associated Institutions (NASU) and the Senior Staff Association of Nigerian Universities (SSANU) and will continue to do so in the furtherance of learning and administrations at their institutions.

At the meeting, they tackled issues that would be needing interventions such as the funding of State Universities and non-payment of salaries of workers, the governance of the university system, the union/management of employee/employer relationships, the keying into agreements reached between the Federal Government and the Unions, the mediation into the ongoing industrial dispute between the university-based unions and government, and the non-payment of national minimum wage and arrears including consequential adjustments.