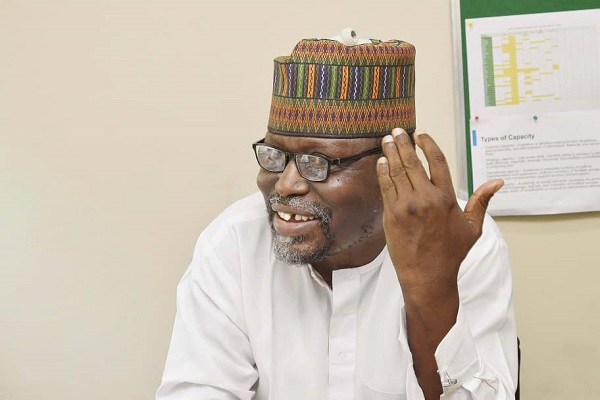 The state of health is significant and the emergence of the pandemic in 2020 brought all nations scrambling to take a better look at their health systems.

However, when there is a crisis, there comes an opportunity to rise and do better and that is where the Nigeria Governors’ Forum Secretariat exhibited its organizational competence.

The NGF has recorded many significant achievements in various sectors such as the COVID-19 response, polio eradication, and many more.
To elaborate more on the health response, NGF media sat down with Dr. Ahmad Abdulwahab.

Dr. Ahmad Abdulwahab is a public health expert with several years of national and international experience in public health programs. He is the Senior Health Advisor at the NGF Secretariat. He also leads the Subnational coordination pillar of the PTF COVID19 pandemic response.

If you want to talk about the health sector, it started with polio eradication where Governors were called upon to champion this which led to the vaccination efforts.
The participation of the NGF was the game changer that led to the certification of Nigeria as being polio-free. That was where we started. After polio, the NGF recognized the importance of strengthening its health team.

We have different pillars such as governance, human resource, financing, and legislation. In terms of how they have been able to fulfill the pillars, it varies from state to state. Some states are struggling with offices. Some are struggling with having a minimum service package. Some are yet to move their staff from the ministry to the board.

We have succeeded to a certain degree in having PHC under one roof. We have moved to broader universal health coverage. In the NGF, we now have four priority areas. The first is Polio, being that the remnants of polio are there. The non-wild ones are what we call the circulating mutant poliovirus. We will continue to enforce polio eradication initiatives with routine immunization.

The second principle is that of Universal Health Coverage. The third is Nutrition and the fourth is Health Security which encompasses all the emergencies that we are having such as COVID, Lassa, and Meningitis. Those are the board priority areas that the NGF is pursuing.

Explain the success recorded with polio eradication, where are we today?

To add to polio, where we are today is that Nigeria has been certified polio-free. However, we are having an upsurge in the number of cases of circulating mutant poliovirus.

This is different from wild polio because, with this one, we have had an increase in the past few months. This year alone, the numbers have increased but the last I know, we had over 600 increases between January last year and this year.

When we had a meeting with Dangote and the Bill and Melinda Gates Foundation, one of the key things was to discuss what Governors are doing on the issue of circulating mutant virus. Everyone is trying to do their best to ensure the increase of quality routine immunization. The follow-up for that meeting is that we will continue to track but the key thing is that we urge Governors to make commitments and strengthen routine immunization and increase the quality of polio campaigns.

Various programs have been introduced by different organizations through the NGF, what has been the Governor's response in your estimation?

The programs are by NGF, and we are supported by our partners. One of the projects that we are working on now is the use of data for prioritization, decision making, and accountability. This means trying to use evidence to obtain all the information. What the NGF has been doing is presenting the state of the current affairs in each of the states so the Governors are on top of it.

Then, of course, we also work on the nutrition scorecard. That is part of the work that we do to hold Governors accountable. To keep them informed.
In all the programs, we have different partners that support us. For example, we work with Bill and Melinda Gates, UNICEF, DataDent, Alive and Thrive, World Bank, FCDO which was former (DFID), and Foreign Affairs and Commonwealth office. Of recent, we are exploring our other partners to deepen our relationship with USAID and WHO.

What would you say is the success or otherwise of the handling of the pandemic by the NGF?

NGF is a member of the technical team of the PSC, specifically, we oversee subnational coordination of the response. Through that, we try to ensure that all that is happening at the Federal is in line with that of the states. This is needed to have one single national response.

We have been able to achieve this with all the contributions. We have seen how the Governors have been able to discuss positive and mobilize their citizens to come out to vaccinate their people. There is also a committee with the PSC and the NGF that is chaired by Delta State Governor, His Excellency, Ifeanyi Arthur Okowa. They meet regularly to enforce the alignment with the federal and the states.

The NGF is chairing that committee which has six Governors as its members. It’s a joint committee of the NGF and the Presidential Steering Committee.

At that point, we try to take some high-level decisions and ensure we have a coordinated national response.
As for the taking of the booster shot, it is based on the value that people attach to it. If people don’t feel as though something will happen to them, then they won’t take it. Since the pandemic has started going down, people are getting more relaxed and not wearing masks. However, it is good to continue to encourage people to take the vaccines. It is better to be safe than sorry.

What would your assessment of the meeting of commissioners for health be and what are your expectations going forward?

One of the successes I see that the secretariat has been able to achieve is the bringing of the commissioners together. We now have a strengthened commissioners forum that meets regularly and reviews progress and shares experiences on best practices. I believe that has been fantastic.

We now have increased cohesion and collaboration between states and amongst the forum. Increasingly, we have more experience being shared and I think things are getting better and better with the states.

That platform is important, and we will continue to support them. For the health team, we serve as the secretariat for them. They meet quarterly.
Earlier this year, we met with the Governors to discuss the PHC Challenge fund. That is one intervention that we are doing. We are introducing a challenge fund that would have states compete. There would be an award given to the most improved and best performing in terms of primary health care.

We hope to launch it possibly next month. The award would be monetary, but the amount is not yet certain. The best performing would be in each of the zones, that is the six geopolitical zones.

Explain the role of state primary health care operators that you have interfaced with and how would you have preferred they operated?

When it comes to Primary health care, we have a Primary Health Care Board. They are responsible for coordinating PHC activities across the states. So far, so good.

As far as how they operate, there is the component of the PHC under one roof, we want all of them to be able to achieve all key pillars. For instance, we want that in all the states, all the PHC staff should be under that one board. Not all states have been able to achieve that yet. In addition, there is what we call the minimum service package. This would mean that states would be able to identify the minimum care. For example, if you have a primary health care facility, you will say that this is the staff and equipment needed to have in that facility.

When they have defined it, each state will have to do a gap analysis based on those criteria and standards they have set. Define the standard, do a gap assessment, and then do what is called an investment plan in terms of how you are going to finish the plan over about a five-year period.

The second area is that of the health insurance that has been taken in 2/3 of states, the coverage could still be better. The coverage is still relatively low. However, compared to what the federal has done, the states can do better but we still have a long way to go.

Are there any areas where you think Governors should step up in meeting the health needs of Nigerians in their states?

In all the areas that we discuss, when it comes to Universal Health Coverage, we need to prioritize the issue of trying to obtain Universal health coverage that was set for 2030. If every administration does its part, then eventually, we would be able to achieve our goals. We need to focus on human resource funds. That is the big challenge. The second challenge would be the availability of drugs. Then, the other area after drugs would be the use of data as evidence.

You would notice that I did not mention money, finance because money is not the major problem. The whole capital funds going to health is relatively low, but we need to be able to optimize the little that we are getting.

We need to also have evidence planning and get quality people. That is what we should prioritize.