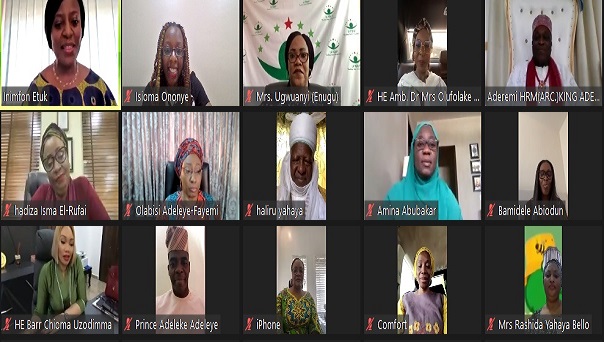 The UN Women, the Nigeria Governor Wives Forum (NGWF), and the Council of Traditional Leaders of Africa (COTLA) held a webinar via zoom to address collaborating to end all violence against women.

It is true that one individual alone cannot make great change. It’s a collective effort that produces immense impact. Therefore, eliminating violence against women and girls is an effort that must be tackled by all.

The need for a collaborative effort to stop all forms of violence against women and girls is what led to the convening of the UN Women, the Nigeria Governor Wives Forum (NGWF), and the Council of Traditional Leaders of Africa (COTLA) on December 14th via zoom.

The theme was on creating a roadmap for enhancing movement building on eliminating violence against women and girls through an inclusive approach with male allies.

Her Excellency, Mrs. Erelu Bisi Fayemi, the First Lady Ekiti State, and the Chair of NGWF stated that it is necessary to discuss having male champions. That the discussion with traditional leaders is pivotal.

“We want to continue to have a series of engagements whereby we support one another,” she said.

Mrs. Fayemi highlighted how the Nigeria Governors’Wives Forum has been instrumental in advocacy efforts around gender-based violence.

The Chair of the NGWF stated that though they have achieved some success, there is more work to be done. Mrs. Fayemi appealed to the royal fathers to support the enaction of the VAPP act for all Nigerian States. There are five states that are left to go which include Cross River, Gombe, Kano, Katsina, and Zamfara state.

“We must continue advocacy for states that have not yet passed the Child Rights Law and we have to put an end to early marriage and female genital mutilation,” she said.

King Adedapo Aderemi from COTLA said it is a rare privilege to have the mothers of Africa around. “The webinar is timely, and we need to draw on all our resources,” he said.

He added that Nigeria carries the highest rate of child marriage and female genital mutilation. The effects of this are it results in trauma and deepening poverty.

He commended the work of the Nigeria Governors Wives because they are key in enhancing women’s movement and building capacity. Dr. Amina Abubakar Bello, the First Lady of Niger State said that collaborating with traditional leaders is needed because it is connecting to the grassroots.

She stated that for them to work properly, certain factors must be addressed.

• Getting the buy-in of Leaders: Dr. Bello said the webinar proves they have the buy-in.
• Dissemination of correct information and sensitization around the culture of silence.
• Mediation + Conflict Resolution: Dr. Bello said that there are instances where husbands threaten to divorce their wives for seeking treatment. In such cases what matters is mediation with community leaders.
• Implementation + Enforcement Villages: It matters that there is cooperation so that the survivors of GBV do indeed get justice.
• Community Engagement: The community needs to work on the factors to prevent gender-based violence. These factors are unemployment and lack of empowerment programmes.

Also present at the webinar was the youth representative of COTLA, Prince Adeleke Adeleye who said it is important for the youth to bridge the generational gap through a fundamental approach.

“How can we preserve the good part of our culture while removing the bad?” he said. There was later a presentation made by Professor Ayodele Atsenuwa. She highlighted the necessity of the passage of the Gender and Equal Opportunities Bill.

There have been several attempts made to pass the bill and it is still ongoing as the bill is presently before the senate. She said the bill is intended to protect women and men against discrimination.

The passage of the bill is critical because it will influence the situation for women in public life, political representation, and decision-making. The bill would also affect the reproductive health situation for women, as well as address poverty.

Professor Atesenuwa said the Governors' Wives and Religious Leaders have a critical role to play. They can assist in providing education and information about the bill to the public. They can support the bill and validate the aspirations of the law. They can also send positive signals and mobilize support.

Dr. Zainab Shinkafi Bagudu, the First Lady from Kebbi State added that by working with the royal fathers, they could achieve their goals. They simply must move from adoption to implementation.

On the next steps, the UN Women Country Representative, Ms. Comfort Lamptey stated that they can all identify how to galvanize their energies around by focusing on pressing priorities.

Her Excellency, Mrs. Fayemi added that they must ensure implementation as they continue to develop a good relationship with the royal fathers in the state.

She furthermore stated that the first ladies would carry on the conversations with civil society leaders in their states. Mrs. Fayemi also recommended that there be formal documentation of the best practices for engaging with traditional leaders.