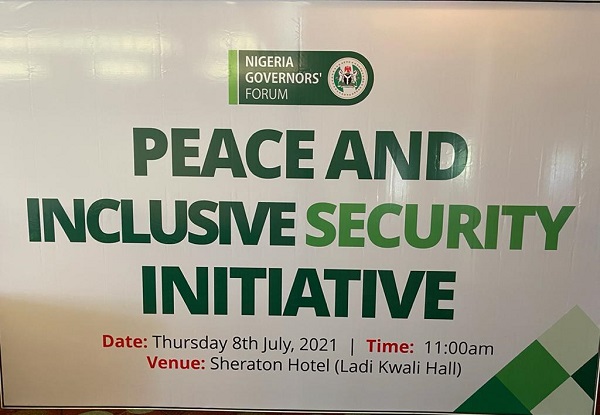 Governors under the aegis of the Nigeria Governors’ Forum (NGF) have disclosed that between May 2011 and February 2021, over 76,000 deaths were reported in the country. The governors spoke on Thursday at the launch of the NGF Peace and Inclusive Security Initiative (PISI) in Abuja.

Chairman of the Nigeria Governors’ Forum (NGF), and governor of Ekiti State, Kayode Fayemi, blamed the situation on proliferation of small arms and light weapons.

According to him, the situation worsened and exacerbated the level of violence and fatalities.

“This number also includes persons who have been killed by a state actor.

“In addition to the proliferation of arms is an undertone of rising ethnic conflict, with different ethnic groups subsumed in conflicts and pitched against one another.”

He also stated the level of insecurity across parts of the country was not only eroding citizens’ safety and peoples’ means of livelihood, but also threatening the expression of the rights of all Nigerians.

Fayemi noted that the spate of violence and coordinated criminal activities have undermined government authority and waned public trust in recent times.

He attributed the current security crisis in the country to several factors.

He listed the factors to include “including an oversized population that the government is unable to cope with, a large number of poor people estimated at over 40 percent of the population who are living below $1 per day, and indeed, desertification which has affected over 60 percent of Nigeria’s land, as drought and climate change has continued to aggravate land deterioration in the country.”

On his part, a former head of state and chairman of National Peace Committee (NPC), Gen. Abdulsalami Abubakar (retd), expressed worry over what he called the instrumentalisation of violence.

He noted that violence has become a commodity in Nigeria.

Abubakar, who was represented by Catholic Bishop of Sokoto Diocese, Bishop Matthew Hassan Kukah, said Nigerians are in denial of the diagnosis.

He said poverty is not the cause of violence in Nigeria, arguing that China has about 300 million unemployed.

Also, the British government warned the rise in conflicts can destabilise Nigeria’s democracy in the run-up to the 2023 elections.

Development director, Foreign, Commonwealth and Development Office (FCDO), Chris Beecroft, in his goodwill message blamed the frequent crisis across the country on injustice and impunity, as well as weak justice institutions in the country.

He, however, noted that peace and stability could be achieved when the causes of conflict in society are managed through strong, fair, and responsive governance mechanisms at community, state, or federal level.

He stressed that the conflict represents an existential threat to Nigeria’s unity and its development.

He said, “the rise in conflict risks destabilising Nigeria’s democracy in the run-up to the 2023 elections.

“There is an active insurgency in the North East; farmer-herder conflicts are extending across the country; resource conflicts in the Delta; tension in the South-East; and banditry in the North West.

“Conflict destroys lives, destroys livelihoods, destroys hope and ambition for the future. Conflict represents an existential threat to Nigeria’s unity and its development.”

Beecroft explained that the use of the police and Army would only be part of the solution, and called for greater emphasis “on reconciliation, mediation, arbitration, and access to justice – all vital components of a vibrant, resilient, and effective social contract.”

According to him, proliferation of small arms and weapons and the weaponisation of social media, are drivers of conflict and instability.

He called for job creation for young Nigerians so they have a stake in a prosperous and peaceful Nigeria.

He added that with the right commitment, dedications and support, there are solutions.

Beecroft stated that the UK Foreign Commonwealth and Development Office recognised the important role the NGF plays in setting the peace and security agenda, and in building state and community level structures and institutions to reduce violence and respond to conflict and insecurity across Nigeria.

“The UK is pleased to have been able to support this initiative and is committed to continue working with the Nigeria Governors Forum (NGF) in advancing its peace and security agenda.

“The UK is engaged in supporting Nigeria to reduce violent conflict in a number of areas. We promote a regional response in the North East and Lake Chad Basin through our contribution to the Regional Stabilisation Facility (RSF) and delivery of programmes on peace building, humanitarian assistance, protection of civilians, human development, good governance and accountability.”

NGF’s director-general, Asishana Okauru, explained that the launch forges a significant step in the life of the Nigeria Governors’ Forum as “we strive to build a nation where safety of lives and property is guaranteed.

“The Peace and Inclusive Security Initiative is a consequence of our determination to contribute to the conversation on inclusive security and add the leverage of the sub-nationals to the efforts to secure the lives and property of our country men and women.

“With the support of the Foreign Commonwealth and Development Office (FCDO), we have been able to set up the Peace and Security Desk at the NGF to help in driving the dialogue around keeping the country safe and bringing all State and non-State actors together around one table to frame a sustainable resolution to the series of security challenges confronting our national experiment.

“I can assure you of the commitment of States not only to the objectives of the PIS initiative but to sustainable peace in the country. The presence of some of our principals today is a testament to this commitment and resolve.”