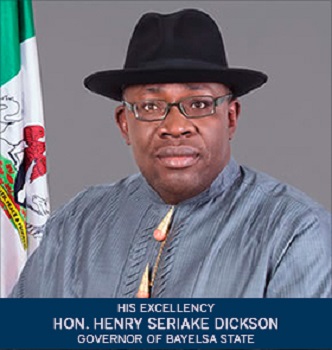 Hon Henry Seriake Dickson was born on 28th day of January, 1966 in Toru-Orua Town of Sagbama Local Government Area of Bayelsa State, Nigeria to the family of Mr. and Mrs. Nanaye Dickson of Orua. He attended Kolobiriowei Primary School, Toru-Orua from 1972 to 1978 and proceeded to Government Secondary School, Toru-Ebeni in 1978 to 1983 where he obtained his West African School Certificate (WASC/GCE).He gained admission into Rivers State University of Science and Technology, Port Harcourt where he studied Law and graduated with LL.B (HONS) in 1992. He proceeded to earn his Bachelor in Law (B.L HONS) from the Nigeria Law School, Lagos in 1993 and was called to the Nigerian Bar that same year.

Hon. H.S. Dickson joined The Nigeria Police Force in 1986 and upon his graduation in 1993 was appointed a Cadet Assistant Superintendent of Police in 1994 whereupon he proceeded to Nigerian Police Academy Kano for Officer Training. During the course of his training, he voluntarily withdrew his service to practice the profession of law.

Hon. Dickson was appointed the Honourable Attorney-General and Commissioner for Justice of Bayelsa State from 2006 to 2007 by His Excellency, Dr. Goodluck Ebele Jonathan GCON, the former President of the Federal Republic of Nigeria who at the time was the Governor of Bayelsa State. He was thereafter elected as Honourable Member representing Sagbama/Ekeremor Federal Constituency of Bayelsa State in the House of Representatives of the Federal Republic of Nigeria, Abuja in 2007. In April 2011, he was re-elected for a second term.

Hon. Dickson holds the traditional title of OLOKODAU of ORUA.

Running for governor under the banner of Peoples Democratic Party (PDP), he emerged victorious and assumed his role as governor of Bayelsa State on February 14, 2012.