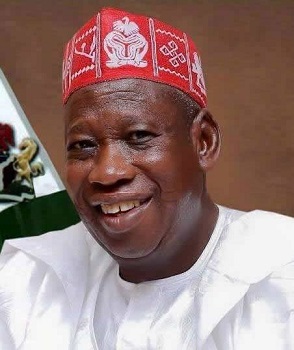 Dr. Abdullahi Umar Ganduje was born on 25 of December 1949 to the royal family of Alhaji Umar Shi’aibu Village.

He began his career as a teacher in 1975 at Oleh College in the South-South geopolitical zone of Nigeria during his one year mandatory National Service Corp (NYSC) Programme. After the one-year programme, he was employed by the Kano State Ministry of Education as Education Officer II in 1976 but left later that same year for the Advance Teachers' College, Kano to take up a position as Lecturer I1 in Educational Psychology. In 1978, Dr. Abdullahi Umar Ganduje got an appointment with Bayero University Kano as Lecturer I. Later, he took up an administrative job with Nornit Limited Kano as Personnel Manager in 1979. In the same year he joined the Federal Capital Development Authority (F.C.D.A) Abuja serving in various capacities including Development Secretary Kwali Development Area), Executive (Secretary, Resettlement and Compensation -FCT), Deputy Director (Corporate Affairs Division), Sole Administrator, Abaji Area Council), Chairman (Gwagalada Area Council), Secretary (FCDA Tender Board), Acting Director (Personnel Department). He proceeded to join the Kano State Government in 1994 as Honourable Commissioner Ministry of Works, Housing and Transport.

In 2011, was elected as Deputy Governor of Kano State. He contested for in the gubernatorial election in May 2015 under the membership of the All Progressive Congress (APC) and emerged victorious.