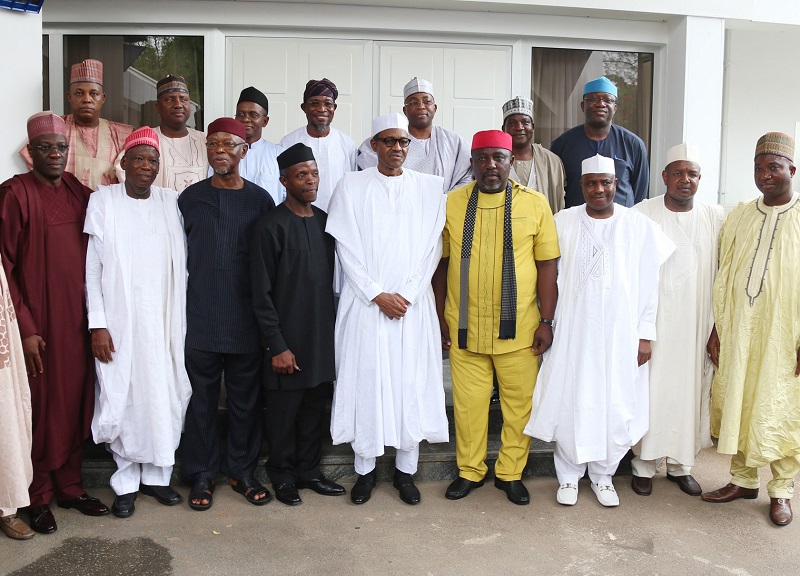 Lawan was on Tuesday elected Senate President while Gbajabiamila was elected Speaker of the House of Representatives.

The All Progressives Congress governors in separate congratulatory messages to the duo said they deserved to lead to both chambers of the 9th National Assembly.

Kebbi State Governor Abubakar Bagudu, who is the leader of the forum, said in the congratulatory message to Lawan, “I have the pleasure to write on behalf of all our progressive governors to congratulate you on your election as Senate President.

“It is indeed a testament to your faith, leadership qualities but also the strength of your character, patience and interpersonal relations capacity.

“As APC governors, we look forward to close working relations with you to strengthen the capacity of our party, and all our elected representatives to move our dear nation forward.

“While looking forward to an early opportunity to meet you and strategise on how we can accelerate the process of delivering on all our campaign promises, please accept our hearty congratulations and the assurances of our highest regard.”

The Chairman of the Peoples Democratic Party Governors Forum, Seriake Dickson, in a statement, urged the new National Assembly leaders to ensure that the rights of Nigerians were defended and protected.

In the statement by his Special Adviser on Public Affairs, Daniel Alabrah, the Bayelsa State governor said what transpired in the National Assembly on Tuesday was democracy in action.

He said, “On behalf of the PDP governors, I congratulate the new leadership of the National Assembly. I urge them to strive to defend the independence of the legislature and to protect the rights of Nigerians.”

The chairman of the NGF, Dr Kayode Fayemi, said Lawan and Gbajabiamila’s election would benefit the country.

In a statement by his Chief Press Secretary, Yinka Oyebode, the Ekiti State governor said the lawmakers had “paid their dues in their respective callings and in the National Assembly where they have earned the respect and admiration of the majority of members as well as Nigerians as very distinguished and patriotic citizens who can be trusted with leadership at high levels.”

Fayemi added, “Neither a rubber-stamp legislature nor a cantankerous one is good for our development as a nation.

“I have no doubt in the ability of the new leadership to strike the right balance, by putting the country and the people first, so that the peace, progress and prosperity that Nigerians want can be achieved.”

Also, South-West APC expressed its delight over the election of Lawan and Gbajabiamila, saying the ranking lawmakers would not disappoint.

APC South-West Zonal Publicity Secretary, Karounwi Oladapo, in a statement on Wednesday, advised the National Assembly leaders to heed to the progressive ideals of APC to move Nigeria forward.

The statement stated, “It is particularly noteworthy that throughout the electioneering for the exalted office, the refrain was Gbajabiamila’s competence, brilliance, leadership qualities and commitment to the vision and ideals capable of evolving development programmes to build a new nation.

“We also want to praise his colleagues across party lines who believed that his vision should be a collective vision to take Nigeria to the Next Level.”