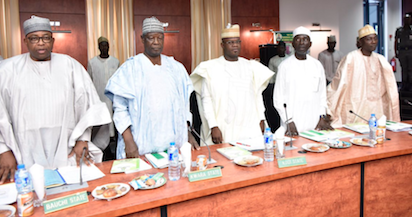 Northern Governors Forum has commended the Nigerian Security and Civil Defence Corps NSCDC for its role in countering vandals as well as contributing to national security, saying the corps has creditably discharged its mandate across the country.

Chairman of the Forum and Plateau State Governor, Simon Lalong, spoke yesterday in Abuja when he visited the Commandant General of the Corps, Abdullahi Gana Muhammadu at the Corps Headquarters.

He commended the NSCDC for the good work it was doing in Plateau State and other parts of the country and sought for “closer ties to tackle the numerous security challenges afflicting the country”.

Deputy Commandant of Corps and Media Assistant to the Commandant General, Soji Alabi, said “the Governor made the remark while appreciating the contribution of the Corps towards maintenance of peace, unity and security in the state and to also solicit for the support of the Corps in his newly added responsibility as the Chairman of the Northern Nigeria Governors’ forum”.

He also commended the Commandant General for superintending over a disciplined workforce, saying “without discipline the Corps would not have succeeded in her fight against crime and all criminalities”.

Earlier, the Commandant General appreciated the visit of the governor and his support for the Corps in his state especially the provision of a befitting office accommodation for officers and men in the state.

He promised to continue to offer necessary assistance for continuous peace and stability in the state, while he wished him success and God’s protection in his new assignment.